IKO Nippon Thompson has continuously been in the forefront of key developments in the field of linear and rotational motion. Ever since the start of the company in 1950, we have dedicated ourselves to serving the industry with innovative products that help our customers to develop state-of-the-art equipment and machines. We are proud to be recognized as “experts in MOTION” and have lived-up to that expectation with more than 70 patents and many significant milestones over the years:

Established Daiichi-Kogyo Co., Ltd., with capital of ¥500,000 in Nagoya, Japan for the purpose of selling bearings and other machine components.

Launched R&D activities for the production of Needle Roller Bearings.

Registered our corporate brand as trademark.

Presented the World's smallest Linear Way (LWL5) with a rail width of 5mm!

Presented the World's smallest Linear Way (LWL3) with a rail width of 3mm!

The first manufacturer of Linear Ways that offers interchangeability, doing away with matching rails and carriages.

Presented the World's smallest Linear Way (LWL2) with a rail width of 2mm!

Introduction of the LRX85, the largest Linear Roller Way in Japan.

Introduction of the IKO CRWG Crossed-Roller Way with rack-and-pinion system.

Introduction of the World smallest Linear Roller Way with a track rail width of 10mm! 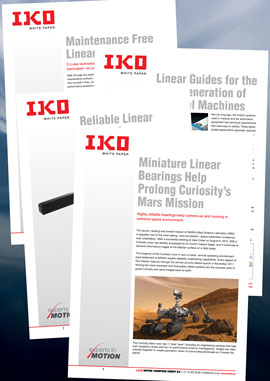 Discover what IKO products can do for your application !

Discover all IKO products in this on-line catalog !

To provide you with a more personal customer experience, we use cookies and comparable techniques. We and third parties follow your behaviour within ikont.eu with help of cookies. If you browse our site, you agree to the use of these cookies.